Confessions of a Fitness Fanatic: “It all started in 7th grade”

My name is Forrest Walden, and I have an addiction to the weight room.

It has literally guided every part of my life from the ability to play varsity football as one of the smallest guys on the team, to the major I chose in college to competing in natural bodybuilding and ultimately my chosen profession of personal training.

Now, as a 40-year-old CEO of a thriving fitness brand, husband and father of 4 kids I’ve taken time to reflect on all that I’ve learned and the discipline it has taken to build my body and my business. I hope that you can learn something from my journey!*

My First Workout Occurred More Than 28 Years Ago.

I remember it like it was yesterday. My parents made me wait until I was in 7th grade until I could play tackle football. Saying I was (extremely) behind is an understatement. Most of the other players on my middle school team had grown up playing competitive sports their entire life.

While they were spending their afternoon’s with multiple sport practices and all star leagues, I was playing capture the flag and pretending to be (insert name of wrestler) on the trampoline in my neighborhood with kids younger and smaller than myself.

I vividly remember my first trip to the middle school weight room with the team. On the menu that day? Bench press.

We started with an empty 45lb bar to warm-up. I nervously laughed with the other guys at how light it was going to be. I am guessing you know where this is going.

That bar rocked my world, literally. The bar rocked back and forth as my muscles (if you could call them that) struggled to balance the lone barbell. We then added a measly 5lb weight on each side for the next set.

I couldn’t lift it. I got pinned to the bench. Pinned under 55lbs! I was the laughing stock of the team and I quietly slipped out of the weight room and vowed never to return.

… And I didn’t, at least for the next 2 years. I used every excuse in the books to avoid the team workouts.

I was the laughing stock of the team and I quietly slipped out of the weight room and vowed never to return. 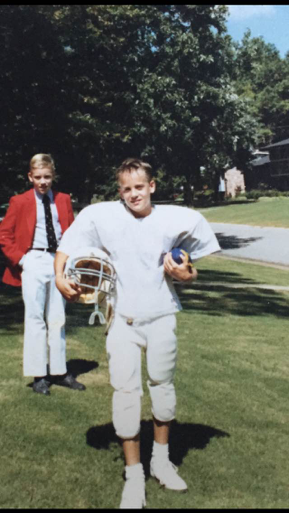 Somehow, I was still able to work my way into a starting position on the football team. However, it was painfully clear to me as high school approached, my lack of strength and speed were going to limit my ability to continue this sport I was starting to love.

Not to mention, my coach quickly spotted this and told me that my only chance to catch up and ever see the field was to become intimately acquainted with the weight room. (big gulp)

I Had One Burning Goal in My Life: To Play Football for Auburn University

I decided that I was going to turn my weakness into a strength. The summer after 8th grade I made an important decision. In fact, it’s the first time I can remember consciously staring down my fear and walking into it instead of away from it.

I knew that I was not a gifted athlete. I also knew that on the field I had outworked many of my more talented teammates to earn a spotting defensive back position on my middle school team. If I could take that same work ethic (and ego) into the weight room then maybe, just maybe, I could turn into the football star I had always dreamed of being!?!

On That day, I Made a Deal with My Mom

My first strength and conditioning program began: If I would load my bike up into our mini-van she would drop me off at the school and then I would ride the four miles home after every workout.

My coach gave me a plan for the summer and I stuck to it with conviction. I completed every single rep and set laid out for me. If there were an award for attending the most “voluntary” workouts over the summer, I would have won.

Finally! I left the measly 5lb weights in my past and I could put the big boy 45’s on the barbell to bench press. I was encouraged… even though most of the other guys were warming up with the same 135 I was using as my heavy weight…

Slowly but surely I continued making progress and my coaches were taking note. I learned to love my training sessions and even found that I was looking forward to the weight room as much as I was my actual football practices.

Slowly but surely I continued making progress and my coaches were taking note.

I went on to have a great high school football career and at the center of it all was a growing love and fascination for all things working out. By my senior year in high school I was one of the fastest and strongest guys at my school. I led the state in kickoff return averages and won my team’s most valuable offensive player. It was quite a metamorphosis from an inexperienced, weak seventh grader that had once vowed to never return to the weight room.

On the cusp of heading back to the weight room after 8th grade, I was trying to find something on TV (which didn’t take very long because we only had six channels and didn’t even have a remote). Nothing appealing was on the ‘good’ channels so I decided to check channel 68. This station was one we barely received it had wavy black and white lines across it but you could still see the programming if you really wanted to watch it.

The second I flipped there, I was stunned to see the two most muscular men I had ever seen in my entire life hanging from a pull-up bar upside down.

I was mesmerized. I sat down and watched the entire film- I later learned it was called Pumping Iron. Those two muscular men were none other than Arnold Schwarzenegger and Franco Columbu. It was the first time I had ever been exposed to bodybuilding.

This scene was what I saw through those wavy lines. I was mesmerized. I don’t think I had any idea that you could workout for sport and not just workout to be better at the sport you were playing. As I sat there by myself watching Pumping Iron through squiggly black and white lines I made a new vow to myself: I would learn whatever it took to become a muscular bodybuilder like the ones I was watching.

Flash forward: when I was in college and reading Arnold’s book, The Education of a Bodybuilder, his quote about first finding the weight room at 15 years old hit me square between the eyes.

Arnold writes, “I still remember that first visit to the bodybuilding gym. I had never seen anyone lifting weights before. Those guys were huge and brutal. I found myself walking around them, staring at muscles that I couldn’t even name, muscles I’d never seen before. The weight lifters shone with sweat; they were powerful looking, Herculean. And there it was before me – my life, the answer I’d been seeking. It clicked. It was something I suddenly just seemed to reach out and find, as if I’d been crossing a suspended bridge and finally stepped off onto solid ground.”

That was it. I could relate to finally stepping onto solid ground. As a shy kid who had just been through my parents divorce, my mom’s re-marriage and middle school, I needed something in my life to give me structure, discipline and motivation. Working out was all that and more and I had found my first true hero and mentor in Arnold’s life and words. 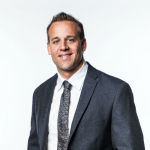